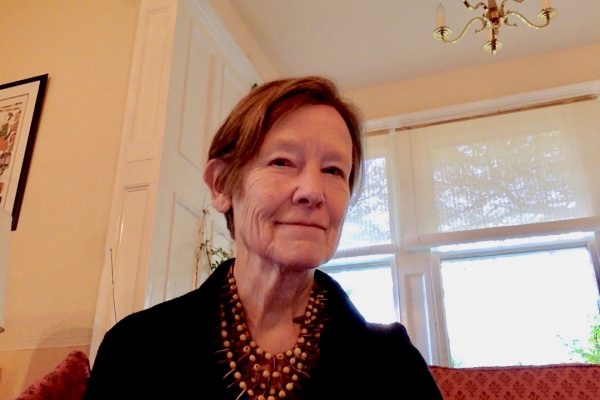 PCE memories – what remains?
In many ways, a Pre-Conference Event (PCE) acts as a bridge between its participants’ ‘outside’ lives and what they are about to experience in the coming conference. In the days after that conference, it can often be forgotten, overlaid by what has been listened to, seen and discussed in its many sessions and conversations. First the PCE, then the main conference, then back to everyday life.

Alternatively, a good PCE can linger on, parts of it coming back to remind one of it in the succeeding months. Maybe this second outcome is the mark of a successful PCE? If so, that is certainly the case for this writer with the 2019 YLTSIG PCE in Liverpool.

This blog, written nearly two months after the event, focuses on the things retained and on the questions raised and still being reflected on by this particular participant. It is thus a personal, subjective record, rather than an objective report of an interesting day. The hope is it will encourage others to think back and to think forwards too – that is, connect the ideas raised to their personal experiences since then and, possibly, point forwards to the next PCE in Manchester 2020. In a way, the blog is another kind of bridge.
Personal question: Was the bridge image appropriate?
Answer: Yes! Connections, things passed over, coming and going in different directions.

Making connections: what connections?
The day was built around an exposition and discussion of the ways in which two parallel strands of the teaching of children and teenagers often coexist without knowledge or awareness of each other.

These two strands are:
a. the teaching of English in full-time education contexts at pre-school, primary and secondary levels and
b. the language-led approaches usually found in the private sector.

The framework provided a useful context for discussing some of the reasons for this parallel development. The objective? To identify the age- and culture-appropriate content, methodology and perspectives which are needed by both the learners and their teachers and to extend this into the areas of materials, classroom activities and external expectations

It linked the often isolated, self-contained worlds of pre-primary, primary and secondary-age learning and teaching. It did the same with language-focussed learning contexts and their parallel ones in full-time education. It showed the need for communication and two-way understanding (and recognition) between teachers and parents / care-givers, educationalists and materials writers, school owners and national wider educational objectives.
Personal question: Is this topic and range of coverage important?
Answer: Extremely important and relevant. So often, activity and aims in these areas are discussed in depth and with interesting and informative examples, but in isolation from the wider context of the teaching of English across a wide age group with linked needs. The bridge was an ideal symbol to reflect all this: both the gaps and the connections.

Personal connections
For those of us who were involved in teaching children across this age range in the 1980s and 1990s, Janet Enever’s opening overview of the ways in which the teaching of English had developed in two parallel strands provided an ideal and informative scene-setter, raising memories and personal experiences.

At a time when foreign languages were only rarely taught in primary schools it was, perhaps, inevitable that any teaching for this 3-10 year old age group should take place largely in language institutes, and focus primarily on the language itself, rather than on the wider educational needs and individual development of its learners or the training of its teachers to understand these.

‘Teaching Children’, published by Modern English Publications in 1978 and edited by the current writer, was the first collection of articles concentrating specifically on teaching for this age group. Shortly after this, it became increasing area of interest in the annual British Council conferences in Italy, where the parallel growth of these two strands became apparent as the decision was made to include foreign language learning in the state education system, with its resultant implications for teacher supply and appropriate training.

Today, several decades later, many of the current approaches to curriculum design, materials content and evaluation reflect this split inheritance, as Janet outlined in her opening talk.

Personal question: Why is this background history important?
Answer: The challenge today for anyone involved in either sector is to understand the needs of the learner, the importance of age- and culture-specific approaches, and to be aware of why and how their own teaching context has been shaped. This has implications for materials writers, teachers, trainers and anyone involved in testing.

New ideas in secondary education
Moving on to the secondary age range, in ‘(R)EVOLUTION: new ideas seeping into secondary education’, Dave Spencer emphasised the need for making connections between learner-relevant language learning within the wider educational school context and that done in a language-focussed one. Teachers working within either sector need to be aware of the other, since many of the learners will be involved in both.

As well as discussing this, he used the flipped classroom as another way of building bridges; in this case, between activities done outside the classroom, often by the individual learner working alone and, building on these, those done when the class comes together with their teacher. Again, there are implications for training and materials here.

Personal question: Is this approach relevant to mainstream education?
Answer: Absolutely! Building bridges in this way between the learners’ responsibility for exploring use of English in their own world, and in the classroom (of any type) can help to ensure that it links with the real world and needs of teenagers.

Building bridges within specific age groups
It was useful to follow these two age-linked overviews with more detailed examples, each described by a pair of speakers, bringing their own individual (and sometimes contrasting) experiences to specific topics. These further examples of parallel worlds focussed on more specific age groups, looking at ways in which more bridges could help to make connections and raise awareness. These included:

Early Years
Joan Kang Shin and Luciana Fernandez: ‘Early Years: Building bridges to the primary classroom: engaging early literary practices’
For those involved in the ever-lowering entry age for learning a foreign language, an understanding of the conceptual development of the learners, their individual needs and interests, and personal ways of communicating physically as well as verbally, through body language, movement and reaction, are as much a part of literacy as the language itself. Variations in cultural and social behaviour need to be understood by teachers and materials designers, and take their starting point as the reality of these learners, rather than be simply a watered down version of materials and activities designed for older children. 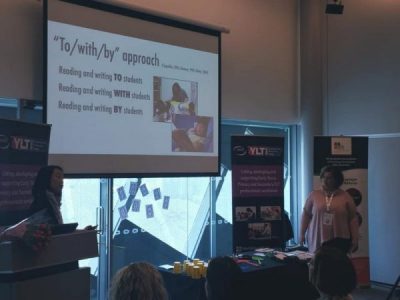 Primary
Shelagh Rixon and Amanda Davies: ‘Primary learning: borrowing the best from ELT and the mainstream’.
Another example of a bridge that needs to be developed for the primary context is the one between the school (teacher) and the parents / caregivers. Much of the perceived attraction of language courses for primary learners is based on a parental / caregiver desire to ‘help’ them learn quickly, gaining some kind of early advantage. For those who are judging their child’s progress simply from a language viewpoint, the range of activities actually done may appear confusing. The need for communication over the content and aims of programmes for primary learners needs to be discussed and explained. 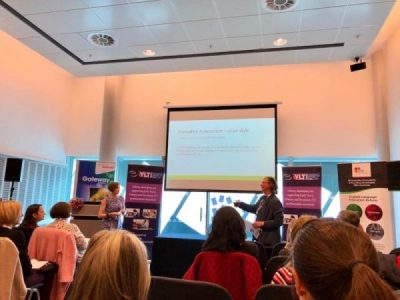 Lower Secondary
Dirk Lagerwaard and Bruno Andrade: ‘Making English your own: developing ELF-aware lower secondary students’
The seeming gap between ‘coursebook English’ and ‘real life and social media English’, especially for young adolescent learners is a common problem in terms of motivation as well as a productive use of time. The current, widespread discussion about the nature and place of English as a ‘lingua franca’ affects attitudes to materials content, evaluation and cross-cultural communicative needs. 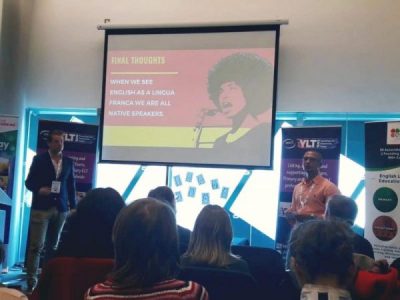 Upper Secondary
Leticia Moraes and Simon Pounder: ‘The next step: preparing upper secondary learners for the future’.
Two contrasting educational systems, in Brazil and Poland, illustrated the similarities and differences between the state and private sectors in these two countries and ways in which the learners are being prepared realistically to use the language effectively for their respective futures.

In Brazil, it is hoped that the new secondary school syllabus will help to bridge the current gap between theory and practice, which is impeding students from being equipped to use the language effectively outside the classroom context. However, it will be essential that the focus of exams also reflects these changes. Similarly, in Poland, in spite of the introduction of a foundation level for learners in both state and private schools, there is still a need to ensure that theory and practice are connected and that any political and social differences do not impact on the learners’ prospects. 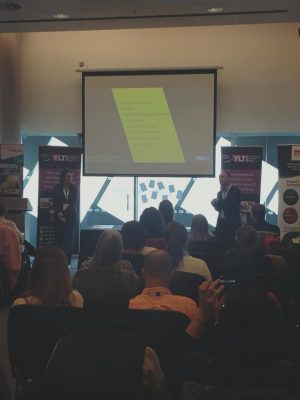 Follow up
These talks were followed by productive question and answer sessions in groups reflecting the four different age sections, and an interactive workshop led by Virginia Parker: ‘Tools for empowering learners and facilitating learning in TEYLs’.

Moving on
Personal question: So what remains for this participant?
Answer: Memories of personal experiences stirred by the sessions. A number of questions to ponder and relate to practical experiences.

In my case, in the area of material design and content, and the methodology of training materials. For example, ensuring that the ideas reflect both of the potential parallel contexts in which they will be used, helping teachers in one strand to be aware that, for their learners, and differences need to be bridged.

Thinking about what is ‘appropriate’ to learners across and within these age groups. A conviction that any approach to the various age groups, learning contexts and training needs, as well as evaluation, needs to build bridges and make connections, rather than being detached and isolationist. And that what is done in one context, from the learner’s viewpoint, is in any case connected to what has been, or will be, done in another.

Finally, perhaps the reflections inspired by this 2019 YLTSIG PCE will at as a new bridge to the discussion of children’s and teenagers’ multilingualism in the 2020 YLTSIG PCE: https://conference.iatefl.org/pce_ylt

After training at the Central School of Speech and Drama to teach drama and English in UK schools, Susan has had varied experience teaching across the age groups, primarily in Italy, as well as in teacher training, coursebook writing and publishing. As Swan Communication, she aims to publish thought-provoking titles!